NEW IRELAND (s) - the hope of many immigrants

Young Father John Joseph Hogan was not the only Irish idealist hoping to establish communities for those he described as "people of small means." His exploratory forays into the Ozarks did result, however briefly, in the establishment and growth of a small settlement mostly in Oregon and Ripley counties. 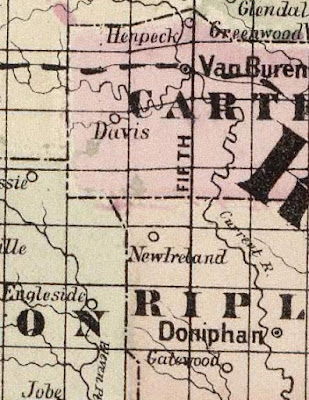 On a Cram's 1875 Missouri map is the enigmatic toponym, New Ireland. It appears to be located near the present day site of Handy, an area that had a heavy concentration of 1859 and 1860 land patents with Irish claimants. No historical society has any documentation or record of new Ireland as a Missouri place name.

Mystery of the Irish Wilderness, page 76

Lynn Morrow, noted Ozarks historian, provided this opinion: "Cram's 1875 map has a number of these idiosyncratic place names ... that, like New Ireland, occur for a short time and then disappear and are not repeated by subsequent cartographers, although I (and no one else) have not systematically compared them. I don't know if there is a source that explains where Cram got all of his information, but it's certainly not all from surveys and post office records."

Chapter 20 of Tim Egan's recent best seller, The Immortal Irishman, is entitled "New Ireland."  In it he notes the American consul in Dublin, William West, in the late days of the Civil War proposed rewarding Irish solders for the Union with 'some desirable portion of our territories and call it New Ireland, of which no doubt General Meagher would in due time be elected Governor."

Thomas F. Meagher ("The Immmortal Irishman" of the title) in his post-Civil War career sought to find that 'desirable portion of our territories' for the Irish in Montana Territory. Meagher was painfully aware of the abysmal tenement conditions in which East Coast Irish families mostly lived. Hogan's pre-Civil War concern was the plight of Missouri's Irish (servant girls and railroad workers could not - by the nature of their separate employment circumstances - meet, marry and raise good Irish Catholic families).

Google the phrase, New Ireland, and other locations show up. Some have an actual community associated with it.


COMING IN 2017: JAMES FORK OF THE WHITE: Transformation of an Ozark River.
Sample pages from this new book can be seen at www.beautifulozarks.com
Our earlier 'river book,' DAMMING THE OSAGE, can be seen at www.dammingtheosage.com

Posted by Crystal Payton at 9:00 AM